Members at The Copdock Show October 2015. 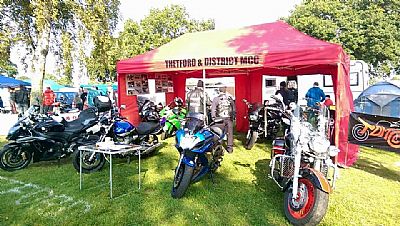 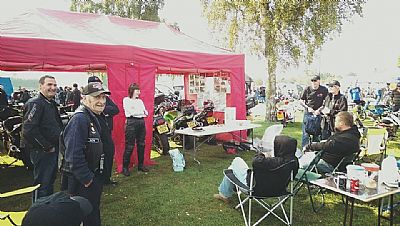 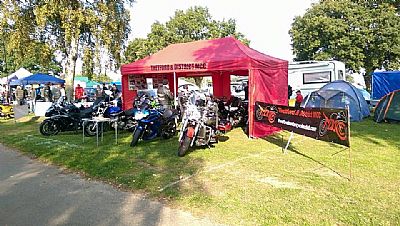 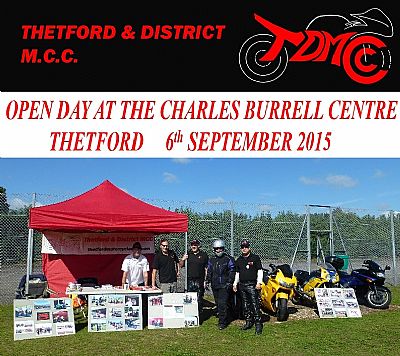 Members at The Cat & Fiddle for lunch on Saturday. 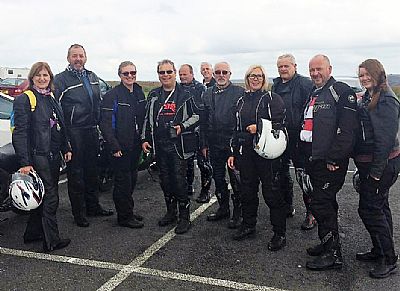 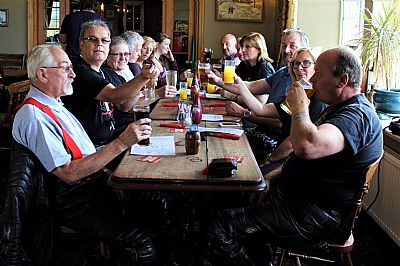 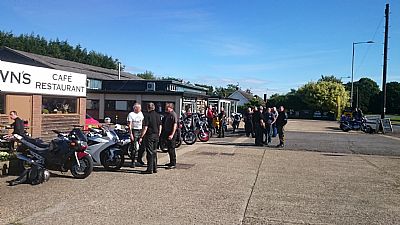 1st meeting place Mrs Brown's Cafe Mundford then on to Richard's house to meet up with the others. 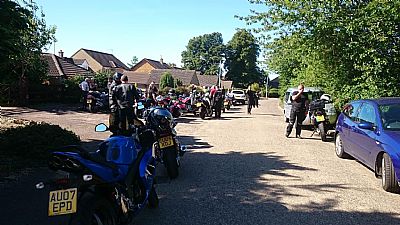 Parked up ready for food..

Relax after meal, looking at ducks getting ready for ride back to Richard's for tea/coffee & cake... yummmm..... 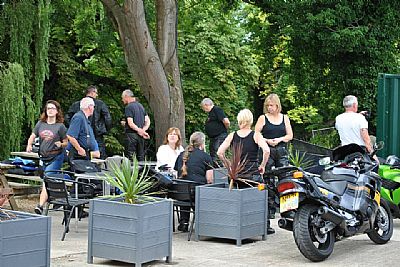 What a great day/ride out, a great route to the Iron Horse Cafe Market Deeping and a equally great route back, both would easily qualify for the iron butt ride. Total of 28 bikes attended which was fantastic, we were never gonna keep together in a group with that amount of bikes but credit to everyone for getting there n back. A big thank you to Mr n Mrs Richie for the pit stop venue and to Mr Ritchie for the route. (By Shaun K-Miles). 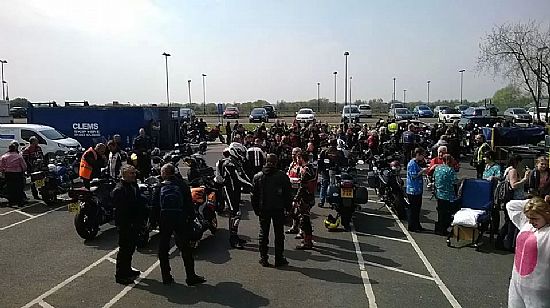 With the weather forecast being so changeable it was with a little apprehension that we started the day.  You can never be sure how many people will turn up if there’s a threat of rain.  Six of us met at McDonalds heading to Dave Friend’s home in East Harling for 10.30.  It was nice to arrive and find another dozen bikes had already arrived along with Jim and the Easter Girls.  After a short break, with Dave organising us, we set off heading through Attleborough and onto Thickthorn services.  This was the one and only time we got caught in the rain.  Yet again, no point in looking at weather forecasts!
The arrival at Thickthorn was something else.  Roughly 100 bikes were already parked up waiting for Dave’s arrival.  This had two effects on those of us marshalling the ride:
Big smiles that so many riders had turned out - Dave’s smile was particularly large and well deserved too.
Total fear at the amount of bikes we were going to have to marshal to James Paget Hospital.
With over an hours break at Thickthorn, we all had plenty of time to dry off, drink coffee and mingle with the other riders.  The mix of bikes and riders could only be described as eclectic, just the way it should be.  The Easter Girls made their way around the crowd collecting change from anyone and everyone, including passing motorist and even asking at Burger King.  At 12.45 Dave called everyone together for a pep talk and final instruction.  Then it was “start your engines” the ride is about to begin.
It was at this point that the plan came to an abrupt halt.  Although the front of the procession continued uninterrupted the back 30 or so bikes made a very sudden stop as Sally’s bike decided it wasn’t going to work anymore and threw her down the A47.  Big thanks to the First Aiders who took charge of the situation and those riders who took control of the traffic.
Best wishes to Sally from Dave and all at TDMCC, and if anyone has an update on her current condition could you let us know so we can keep Dave informed.  Thanks.
With the arrival of the Emergency Services those of us who weren’t directly affected, or whose help was no longer required, headed off to James Paget.  This time, with me leading.  Thankfully Dave had handed out maps to those of us marshalling.
We arrived at James Paget approximately 15 minutes after the main ride who had made a spectacle of themselves along the sea front in Gt. Yarmouth and regrouped along the South Quay.  The Easter Girls were then joined by many of the riders as they headed for the Children’s Ward, Children’s IC and waiting areas where the eggs were handed out.
As the afternoon drew on the riders started to drift off, heading back to their various home, which I had learnt included Derbyshire.
The final count for the day came to 112 bikes, over 80 Easter Eggs were delivered to James Paget plus a similar number heading to Queen Elizabeth Hospital in a few weeks and £105 collected for the charity.
Big thanks for all who participated in what is hoped to be an annual run and a huge thank you to Dave Friend for all his efforts in organising the run.
Finally - Get well soon Sally. 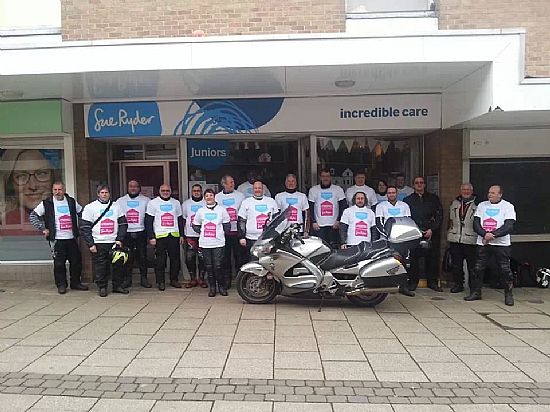 The weather forecast on Saturday night was not good, rain at 9,11,1,and 3 o’clock so I was a bit nervous as to how many bikes would turn out if the day started with rain.

Up early at 7 the weather was grey it had been raining but there was no rain at the moment. Ready to set out at 8.30 and heading for Thetford MacDonald’s what a shock on arrival a sea of bikes parked outside a most welcome surprise about 20 bikes at least.
Greeting my fellow riders from the IAM group of Fen riders, bikers from Sue Ryder charity shops in Kings Lynn and Holbeach and of course all the supporters from Thetford and District Motorcycle club (TDMCC).
09.30 and off to the Riverside car park in Thetford for our first stop and photo shoot and to meet the area manager Jo Panks who was handing out tee shirts and taking the official snaps. 10.00 and setting off for the first shop at Fakenham led by Ian westlake and waved off by Jo Panks.
11.00 arrive at Fakenham and greeted by the shop manager Rachel and her team for tea and biscuits. Bit disappointed not to have any bikes join us at Fakenham, we rattled a few tins at the customers and managed to raise £20.00 in donations. Ian continued to lead the group.
11.30 And off on the next leg to Kings Lynn Sue Ryder Furniture shop here we were greeted by Jackie and her staff and another 2 riders joined the group. They were from the Bentinck arms Kings Lynn who had heard about the ride and decided to join in.
It was now Soji from the IAM group that was going to lead us to Downham Market we set off a little late so that a few riders waiting for a burger had time to eat them. Setting off at about 12.45 we arrived in Downham Market for 1.15 there was a great welcome from Jane and her team with a few customers cheering us in. More refreshments and tin rattling where we managed to squeeze another £20.00 from the Sue Ryder customers.
Nearly 2.00 and people are getting a bit fed up being herded around by me, feel about like a tour guide cracking the whip and keeping everybody together. So it’s off to Thorpe hall led by another member of the IAM group that has volunteered. Arriving at nearly 3.00 and greeted by staff at Thorpe hall we were taken upstairs above the shop for refreshments including sandwiches cakes pastries etc. A good spread. We then presented the Staff with the money raised.
Bikers £120.00
Collections at Fakenham £ 20.50
Collections from Downham Market £ 20.00
Grand Total for the day £160.50
Well done and thanks to everyone that took part, if you would still like to make a donation then please text “Thorpe” 70007 or see me and I will pass your donation on.
Special thanks to Ian and Soji for leading the group and look out for the plans for next year’s ride. I am considering the early May bank holiday Sunday when the weather might be a bit kinder..... any thoughts on the timimg or changes to the format of the day let me know. Chris Hubble 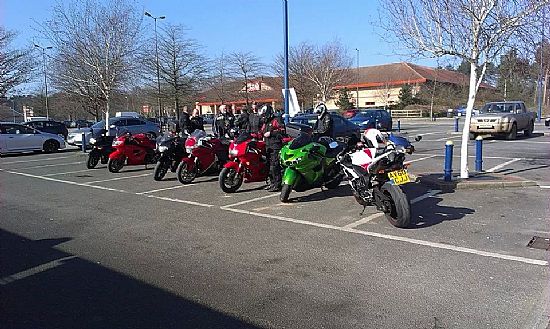 Just back from the first semi organised Rideout of the year.  I say “semi” as I was in charge of the route and I’m not known for my organisational skills.  That said word had got round as ten bikes, including riders, turned up in Thetford. Although two had only turned up to say “hello”, have a coffee and/or smoke, then headed off to do other exciting things for the day.  It’s still nice to see people though.  The remaining eight set off shortly after 10.30, which for TDMCC is really quite good!
We set off with a plan (my plan) of heading to Gt. Yarmouth, via Diss etc.  Turn right at Gt. Yarmouth onto the A12 and head for Lowestoft, Ipswich and then on to Clacton via the A120 & A133.  Then back to Thetford, via Sudbury and Bury St. Edmunds, with stops on route for fuel, food etc.  A round trip of some 185 miles.
All started well, Gt. Yarmouth appeared followed by Lowestoft and the first fuel stop.  At this point, two of our numbers decided it was time to head home, again with other exciting this to do.  This was shortly followed by a second stop for etc.  It was a definite case of one out, all out.  With everyone feeling much relieved, a quick discussion was held about our progress.  With the volume of traffic, due entirely to the unusually nice weather, we were falling behind our (my) planed schedule and we (I) was getting hungry.  The conclusion of our informal discussion was to head to Southwold.  A favourite of TDMCC.
Some 20 minutes later, following a very slow ride, we were all parked up in Southwold complaining about the queue at the chip shop.  This was followed by an off road tour of Southwold ending at the pier where food & drinks were purchased and readily consumed.
Note to anyone reading this.  The chip shop at Southwold pier is very expensive, as are the ice creams, just ask Slow Boy.
Following food, drinks & smokes another discussion was held the conclusion of which was;  skip Clacton, Sudbury, in fact the entire second half of the route and head along the back roads to Beccles and the services on the A146/A143 round about.
Following fuel, drinks & smoke we yet again set off heading back to Thetford, or home.  Arriving back in Thetford @ 4.30ish, a round trip of 150 mile.
Ride out number one complete…
Mike